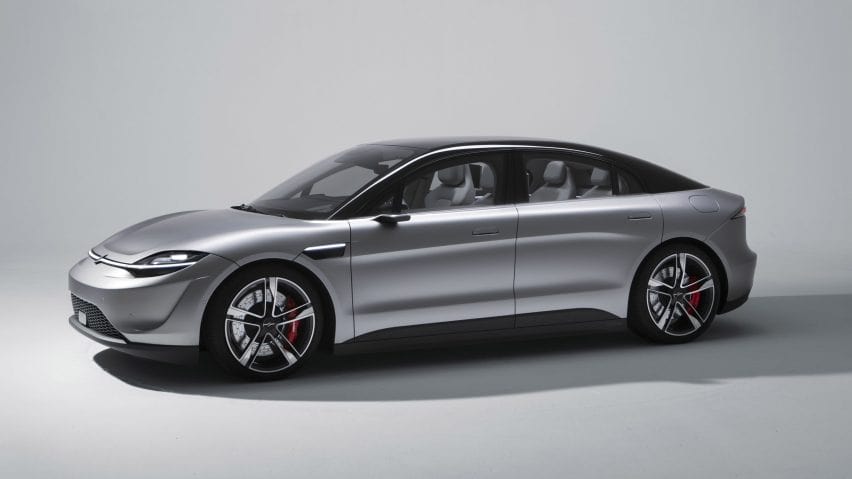 Sony’s big CES reveal was actually a surprise, like a real surprise.

Now this is the crystallization of all the work Sony has been putting in recent years to do with autonomous driving safety and even image sensors and object detection.

It does look a little like a Tesla but that’s good it doesn’t look like an extreme concept car that will never see reality and the interior of the car is unashamedly Sony the interior from what we can see has a very strong aesthetic, It’s all creams and grades.

It’s all very subtle and understated so exactly how autonomous is this prototype well it didn’t drive itself on stage there was a driver behind the wheel as it was revealed according to Sony autonomous at least for now.

Sony’s press conference has just finished so we’re still trying to wrestle with all the specification and the things we do know that there’s 33 different types of sensors that includes Lider, camera sensors that Sony made themselves and they create what Sony is calling an oval system that both protects inside and outside.

Sony Vision S is an electric car with 200 kilowatt engines one on the front and one on the rear.

The entire interior will be bathed in 360 reality audio now that’s the Sony technology that kind of creates a sound stage and we’ve seen it in speakers and in headphones.

This is very much the first time we’ve seen it in anything approaching a car even if is still a prototype so let’s get a little bit more detail about all those sensors.

They include CMOS image sensors that are both highly sensitive and have a high dynamic range  that’s paired with solid-state lider that grasps the 3rd environment around it on top of all that there’s sensor fusion tech which mergers  all those sensors together  and helps a more accurate object recognition even in for back light and nighttime driving.

For those driving and riding shotgun there’s a panoramic display  along the front of the dash riders will be able to communicate maps and other media content between themselves switching content between two different screen.

Now that’s absolutely everything we know at this point, so we have lots of questions still remaining.

It’s a prototype but would this lead to actual cars in productions what’s the actual range on this things if it’s actually on the streets, it can come in different colors. how many cup-holders are there.

The bigger question is “what is Sony going to do next”.

Stay tuned with Technobloga for everything about new tech in around the world.